In late 2021 an elegant study was published that identified the molecular basis for protection of a rare coding variant associated with Alzheimer’s Disease (AD)1. The authors used a variety of now common techniques to establish that the coding variant, PLCγ2 R522, was hyper-functional which resulted in altered phagocytosis and endocytosis. They further showed that these hyper-functional alterations could be attributed to a reduction in the substrate for PLCγ2, PI(4,5)P2. Using a less well known technique, called lipid shuttling, they showed that delivery of exogenous PI(4,5)P2 could rescue the hyper-functional cellular phenotype. Lipid shuttling, highlighted here as our Shuttle PIP system, has now been used for over 20 years to visualize phosphoinositides and help determine their physiological roles in living cells.

Phosphatidylinositol (PI) contains an inositol phospholipid headgroup that can be phosphorylated by specific kinases at the 3, 4, or 5’ carbons to produce seven phosphoinositide isoforms (aka phosphatidylinositol phosphates or PIPs)2. Early cellular work on PIPs and their functions had been able to determine specific subcellular locations using GFP-based biosensors. However, it became clear that additional tools were needed as PIP-specific antibodies revealed PIPs in subcellular compartments such as the nucleus that the GFP-biosensors did not detect. Subsequent work demonstrated that polyamine carriers and their fluorescent derivatives could deliver certain inositol phosphates and PIPs into cells3 (Figure 1). Shuttled PI(4,5)P2 localized to plasma membranes, punctate cytoplasmic structures, and nuclear speckles, while shuttled PI(3,4,5)P3 also localized at the plasma membrane and cytoplasmic vesicular structures but remained outside of the nucleus. It was demonstrated that PI(4,5)P2 introduced via shuttling methods was biologically active; shown by mobilization of intracellular calcium stores. 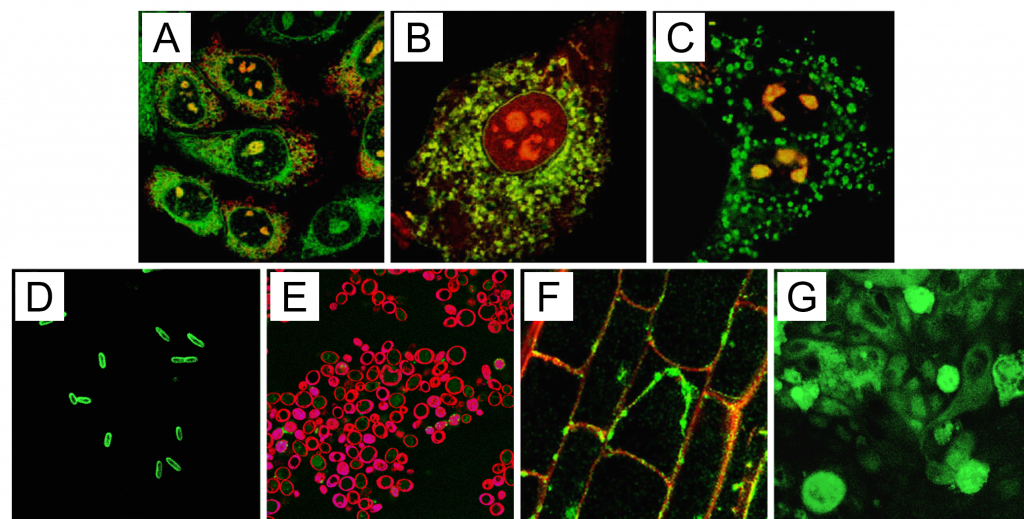 Following this initial report, use of the Shuttle-PIP system was expanded by a number of research groups to elucidate roles for PIPs in a plethora of cellular functions. A few examples include, (i) polarization and migration of neutrophils by PI(3,4,5)P3 via a Rho GTPase-mediated positive feedback loop, (ii) PI(3,4,5)P3 induced translocation of phosphorylated Akt and the glucose transporter, GLUT 4, and (iii) PI(3)P stimulation of phospholipase D1 which activates the mTORC1 pathway causing cells to grow in response to amino acid feeding. Notably, the system was further validated for use with all seven naturally occurring PIPs.

This early follow-up work laid the foundation for how Shuttle-PIPs could be utilized, but more recent studies have tended to focus on how PIPs and their synthesis pathways are involved in disease pathogenesis. The above-mentioned study found that PI(4,5)P2 delivered to human induced pluripotent macrophages increased phagocytosis and this effect was larger in cells harboring the PLC variant that protects engineered mice from more severe Alzheimer’s disease. The protected phenotype may also be related to endocytosis and other lipid vesicle transport systems, but their data supported the PLC substrate PI(4,5)P2 as a critical piece of the protection against AD providing new ideas of how to address molecular aspects of AD.

Other recent work examined clinically relevant targets such as IFITM3, an interferon-related protein that is highjacked in some B-cell malignant transformations4. In this context IFITM3 amplifies PI3K signaling promoting increased PIP3 levels while IFITM3 deficiency leads to low cellular PIP3. Shuttle-PIP delivery of PIP3 to IFITM3 null mice showed only partial rescue of the cellular deficits observed with loss of IFITM3. These results suggested that the cellular functions of IFITM3 could be de-coupled and perhaps targeted independently to treat B-cell related cancers.

Kinases and effectors of phosphoinositide synthesis such as PI3K, PI5P4K, and PTEN have well known associations with cancer and other diseases. While there are established drugs available for some of these targets, chemoresistance and refractory disease remain issues. This has led to pursuit of combinatorial therapies and new drug screens that target other nodes in the PIP synthesis pathways. As shown above, delivery of exogenous PIPs in the context of a null or deficient protein can help dissect separate functions of a disease-related protein or pathway. In terms of drug screening, this method could be used as a novel type of phenotypic control that could differentiate between compounds that act at different points in phosphoinositide synthesis.