Exosomes and extracellular vesicles (EVs) comprise a family of lipid enclosed particles that are released from cells. While the first observations of EVs were made in the mid 20th century, interest in these particles has exploded over the last 15 years. This is primarily due to the discovery that EVs can carry nucleic acids between cells. However, they have also been shown to carry diverse cargo sets of proteins, lipids, and in some cases entire organelles (Figure 1). In light of these observations, EVs are now generally accepted as active players in cell signaling and transfer of genetic information between cells.

While the functional capacities of EVs are increasingly clear, the subtypes of EVs remain less well-defined. The term ‘extracellular vesicle’ is often conflated and used interchangeably with the term ‘exosome’, however exosomes have now come to be defined as a size-specific subset of EVs ranging from 30-100nm in diameter. Likewise, microvesicles are 100-1000nm in diameter and apoptotic bodies are greater than 1000nm (1 micron). Importantly, these size ranges are not concrete, and functional and biochemical definitions of these particle groups are still emerging (see Figure 1).

Exosomes are the most studied, and by extension best characterized subtype of EV. In addition to their size, these vesicles can now be generally defined by several protein markers, including CD63, ALIX, and TSG101. Exosomes are also broadly defined as having an endosomal origin, wherein internal budding of endosomes leads to formation of multivesicular bodies (MVBs). Vesicles within MVBs then become exosomes if an MVB fuses with the plasma membrane, thereby releasing its contents into the extracellular space.

While the biophysical and biochemical definitions of EV subtypes are still evolving, they are nonetheless important to consider when designing experiments and analyzing EVs. 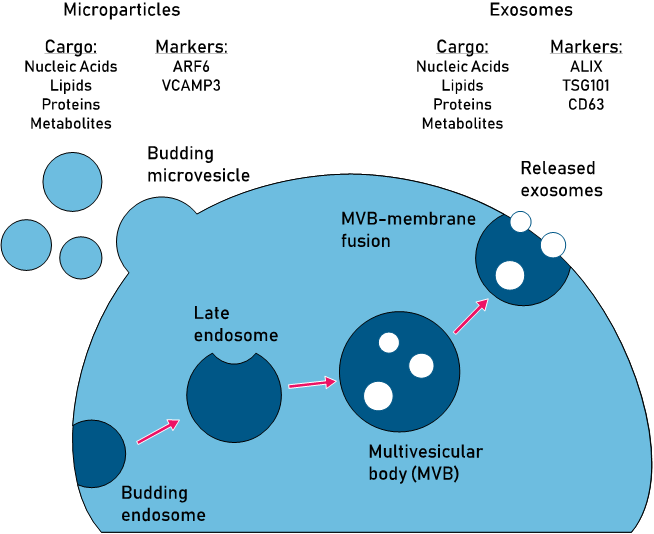 Figure 1: Comparison of pathways, cargo, and markers of the two major EV subtypes: microvesicles and exosomes.

Multiple methods exist for the purification and isolation of EVs. However, they all have limitations that must be considered with a specific outcome in mind, be it high purity or enrichment of EVs. Here, we will briefly examine the most common techniques and outline advantages and disadvantages of each.

As the name implies, differential centrifugation (DC) involves a series of centrifugation steps with increasing speeds or g-force applied. The increase in speed and force is inversely correlated with the size and density of cellular fragments and particles. Therefore, intact cells and large cellular particles will pellet out at low speeds while much smaller particles, i.e. EVs, will require extremely high speed to pellet out. This high speed method, known as ultracentrifugation, has historically been the most common method for isolating EVs.

While this method is well established and is useful for handling large tissue or culture samples, it’s utility is limited by several factors. First, it is very low-throughput as the average ultracentrifuge can handle only 6 samples at once. Second, it requires a significant amount of hands-on time for sample prep as well as for the spin steps themselves. Lastly, there is significant variability in the percent recovery of EVs and the purity of the final sample from experiment to experiment. Often, large soluble cellular components or protein aggregates will co-pellet with EVs when using DC.

Again, even though it is a traditional accepted method, DC may be prohibitive in settings where access to an ultracentrifuge is limited, or where high reproducibility and sample purity are of chief importance.

Size exclusion chromatography (SEC) presents a significant upgrade over DC when comparing sample purity and reproducibility. The main point of consideration with SEC is the size cut-off of the column being used. Most EVs will be too large to have a significant retention time on the column and thus can be easily separated from soluble components. However, smaller EVs may be retained with soluble components if the exclusion limit is too large. This can lead to the same types of contamination observed with DC.

Additional time and care must be put into establishing in-house methods, for example, the fractions in which EVs can be expected to elute given a specific SEC column. In some cases a second SEC column may be necessary to purify specific EV fractions that retain relatively high amounts of impurities. Despite the additional optimization that may be required with SEC, the method is clinically applicable. The time and labor requirements are also much less than those required for DC.

Precipitation-based isolation of EVs has grown rapidly as an accepted method primarily due to its ease of use. Whereas SEC and DC require highly specific equipment, significant set up times, or both– precipitation is low cost and requires only basic laboratory equipment.

The vast majority of precipitation reagents contain some formulation with polyethylene glycol, which is non-toxic and non-disruptive to native EV structure. Precipitation is also extremely rapid as pelleting of precipitated EVs can be done in as little as 30 minutes after addition of the reagent. Precipitation has the added benefit of significantly enriching EVs from large sample volumes with 40-50 fold concentration attainable.

The primary drawback to precipitation is that it is inherently non-exclusive and larger, non-EV components will coprecipitate with EVs. For this reason, precipitation alone is rarely suitable for downstream characterizaton. Secondary clean-up and purification steps such as SEC or filtration should be considered (see Figure 2).

Ultrafiltration is similar to DC and SEC in that it takes advantage of the size and biophysical properties of EVs for purification. In short, a sample is placed over a filter with a defined cutoff size and the fluid volume of the sample is pulled through the filter either by vacuum or centrifugal force. This serves to simultaneously remove soluble components while concentrating large extracellular particles such as EVs.

While this method is faster and more efficient than DC in terms of concentrating EVs, it is subject to some of the same artifacts such as damaged EVs and contamination from large aggregates. It may also not be compatible with highly complex tissue samples such as blood or plasma.

The collective observations that EVs ferry genetic and protein cargo between cells immediately raised the possibility of utilizing EVs as therapeutic modules. Indeed, EVs have been proposed as novel therapeutic agents across a range of disorders including cancer and neurodegeneration.

The involvement of EVs in the tumor microenvironment of certain cancers has introduced the idea of ‘reprogramming’ endogeous EVs to combat tumors at their source. Conversely, some researchers are seeking to engineer EVs (engineered EVs, eEVs) from the ground up using only the essential protein moieties for cell targeting and then loading eEVs with a drug of choice. A recent example of this latter approach is the incorporation of the cGAS-STING agonist into EVs for targeted anti-tumor activity.

Another potential avenue is utilizing genetically engineered, programmable stem cells that overexpress and release a gene of interest in the MVB-EV pathway. In this manner, the cells could essentially be used as bioreactors to produce EVs carrying proteins that might be deficient or absent in patients.

In closing, regardless of the EV subtype or application being tested, extensive consideration should be given when choosing purification techniques for EVs. Furthermore, extensive characterization of the purified EVs should be performed in order to confirm purity, subtype, and relative concentration. This should include the use of basic biochemical techniques such as western blotting and imaging techniques such as electron microscopy. If required, more quantitative analyses can be performed using flow cytometry and nanoparticle tracking techniques.